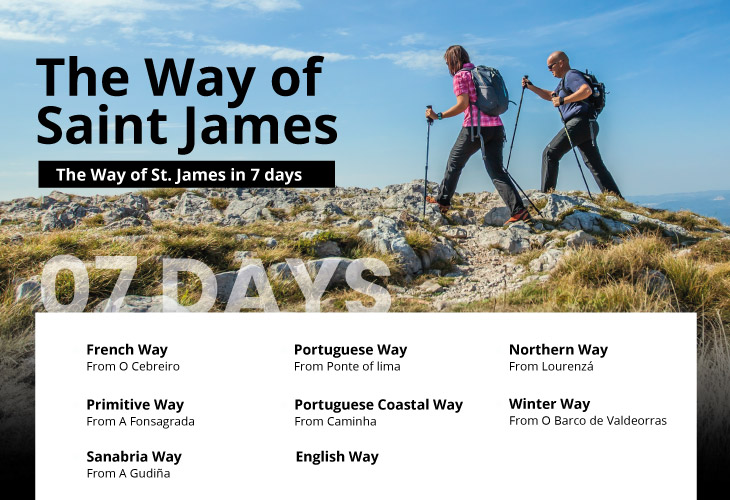 You may think that having only 7 days to do the Camino de Santiago is not enough, but let me tell you that during those days you will be able to discover spectacular routes as well as get the longed-for Compostela.

Keep reading and check out all the options you have, as well as the best starting points according to each route, to be able to do the Camino in a week and discover what this pilgrimage journey, forged through the centuries, can offer you.

The French Way from O Cebreiro

Although what most pilgrims do when they have only a few days for this experience is to walk the last 100 kilometers of the French Way, in 5 days starting from Sarria, the fact of having a couple of extra days will be something you will be very grateful for.

The two stages you will do before reaching the most popular starting point will allow you to enjoy the Jacobean route in a calmer and more authentic way and savor each step before entering fully into the heart of the French Way, usually crowded with pilgrims at certain times of the year.

In addition, the stages that comprise the section O Cebreiro – Sarria are of extraordinary scenic beauty, since they run between the valleys and the typical nature of the mountain ranges of O Courel and Os Ancares.

This is an area of special tradition and curious architecture, with the pallozas of O Cebreiro, circular stone buildings with thatched roofs that served as homes and are influenced by the Castrexa culture, so widespread in this part of the country.

The Winter Way or Camino de Invierno is the great unknown among all the official routes. This is an alternative route of the French Way, used especially in the winter months (hence its name) to avoid the climb to the snowy mountain pass of O Cebreiro.

Choosing this Camino you will be able to enjoy a much more leisurely and relaxed walk than the other more popular routes. You can also claim to have been in the four Galician provinces, as it is the only Camino that runs through all the provinces of the community.

But, undoubtedly, one of the greatest attractions of departing from the area of Valdeorras and then setting foot on the lands of the Ribeira Sacra, is the possibility of enjoying their exquisite wines. You cannot leave this area without tasting such a great variety of wines.

If you have 7 days, you can start your Camino from the charming village of Ponte de Lima. This town, one of the oldest in the country according to historical archives, has a rich heritage among which stands out, as its name suggests, the Roman stone bridge that crosses the Lima River.

If we arrive with enough time to this town, we can approach the neighboring Viana do Castelo and visit its famous Sanctuary of Santa Luzia to start our walk in the best way.

Choosing this part of the Portuguese Way we will also have the opportunity to pass through other beautiful places such as Valença do Minho, join in Tui the pilgrims who start their pilgrimage there, discover the spectacular old town of Pontevedra or visit Caldas de Reis, a picturesque thermal village that is a must stop.

The Portuguese Coastal Way from Caminha

The Portuguese Coastal Route is always a good option. With one week you will have enough time to get a glimpse of what this increasingly popular route has to offer.

Departing from the unique Caminha, a medieval village on the border between Portugal and Spain, you will enter Galicia through the fishing village of A Guarda, known for its spectacular castro of Santa Trega.

You will discover some of the most beautiful stages of the entire Portuguese Way, running along coastal paths with magnificent views of the sea, your loyal companion during the first days.

We will pass through the cosmopolitan city of Vigo and join the central Portuguese Way in the town of Redondela, to reach the final destination of every pilgrim who embarks on this adventure: the Plaza del Obradoiro in Santiago de Compostela.

The Northern Way from Lourenzá

For those who choose to do the Camino del Norte in 7 days, some tough stages await them, but also an unparalleled scenic reward, in addition to the typical tranquility of the Galician countryside.

You will pass through one of the seven ancient capitals of the Kingdom of Galicia: Mondoñedo, with its spectacular cathedral and several architectural gems hidden in this unknown town. You will also have the opportunity to cross Sobrado dos Monxes, and visit its unmissable Cistercian monastery of Santa Maria.

At Arzúa you will join the pilgrims that walk along the French Way to face the two last stages of this Jacobean route.

One of the advantages of choosing the English Way is that you can do this route completely, as it can be walked in just 5 stages. This would leave you with extra days to visit the beautiful city of A Coruña or extend your stay by moving to the Costa da Morte, a magical area full of legends that deserves a few days.

The English Way has several attractions such as Betanzos, Pontedeume or Fragas do Eume, a natural jewel of great value as it is one of the most natural and best preserved Atlantic forests.

The Primitive Way from A Fonsagrada

Once a pilgrim, always a pilgrim. This is a common saying in the world of the Camino de Santiago. And the fact is that those who choose the Primitive Way are usually recurrent pilgrims who, having been dazzled by the magic of the Camino, decide to walk it again through a different route.

This Camino, known both for its harshness but also for its extreme natural beauty, crosses numerous typical Galician rural villages, giving also the possibility to contemplate the amazingly well-preserved Roman wall of Lugo. It has the merit of being the only one in the world that is preserved in its entirety and, therefore, is considered a World Heritage Site.

The Sanabria Way from A Gudiña

The Sanabrés Way is a challenging route, but the reward is, as it happens with other Ways, that we would be walking through a less known and very quiet route. This will allow you to enjoy nature while walking with all the tranquility and peace of the world.

Besides, what better reason could there be to recover from the effort you have made than to take refuge in the thermal city of Ourense? You won’t be able to resist soaking in one of its numerous open-air thermal baths or marveling at its rich historical heritage.

Take the opportunity to taste some of the typical dishes of inland Galicia such as Galician broth or to sweeten your day with a piece of bica (a traditional dessert of the area).