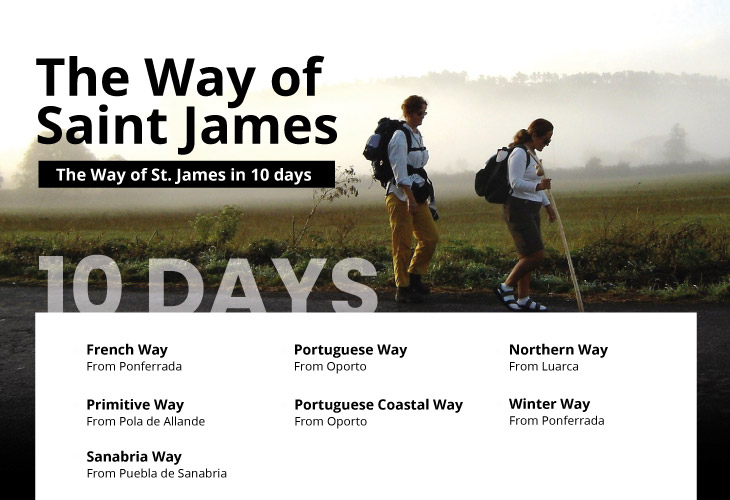 If you have 10 days to enjoy the Camino de Santiago, you will have multiple routes to choose from, even from the same starting point.

Just as we already showed you your options if you only had 5 days to complete the Camino de Santiago, now we are going to tell you about the towns from which you will have to leave if you want to get to Santiago de Compostela in 10 days.

The French Way from Ponferrada

The French Way continues to be the first option of any pilgrim, especially for those who want to take the Camino de Santiago for the first time. And Ponferrada is one of the favorite starting points.

Its famous Castle of the Templarios, next to the Church of San Andrés, the Clock Tower or the Basilica of the Encina are some of the main points of interest in this city. If you have time to visit them before starting your walk, do not hesitate to do so.

Just a couple of days after this, the French Camino awaits you on the way up to Cebreiro, a long and moderately difficult stage that will probably be the biggest challenge on a generally simple and easy route that pilgrims coming from all over the world walk every year.

The Winter Way from Ponferrada

In case you are very clear that Ponferrada is going to be your starting point, you also have theWinter Way as an alternative, in which you will avoid the massification of the French Way to enjoy a millenary route that goes back to the ancient Roman Empire.

If you choose this route, you will feel the satisfaction of having walked a full official Camino de Santiago, visiting the four Galician provinces and contemplating their natural landscapes until you join the Via de la Plata in the last few kilometers.

In addition, and despite its name, the Winter Way is a route that can be walked at any time of the year, which is why it is always recommended.

The Portuguese Way from Oporto

Porto is, together with the Portuguese capital, Lisbon, an increasingly popular tourist destination, especially for Spanish and Europeans in general. That is why it is a good idea to start your experience on the Portuguese Camino de Santiago from here and enjoy all that this city can give you before your pilgrimage.

The bars and restaurants located on the banks of the Duero, where you can eat the most typical dishes and drink the wines made on the nearby wineries, are waiting for you. You can then continue visiting the Palacio de la Bolsa, the Palacio Episcopal, its Cathedral, or seeing the Tower of los Clérigos.

Barcelos, Ponte de Lima or Valença do Minho are some of the places that await you next, before you enter the Galician lands. Then, Pontevedra or Caldas de Reis will follow on your way to Santiago de Compostela.

The Portuguese Coastal Way from Oporto

Another route that is becoming more and more popular each year is the Portuguese Coastal Way, thanks to the landscapes along the coast that the traditional Portuguese Camino cannot offer.

This variant along the coast is considered an official Camino since 2009. It starts in Porto to continue through places such as Póvoa de Varzim, Viana do Castelo, Caminha or even Vigo. You will enter the Spanish territory on the ferry that crosses the Miño river, something unique in a Camino de Santiago.

Choose this option if you want to enjoy the Portuguese and Galician coasts during your journey to Santiago de Compostela. And don’t forget to try the Albariño wine or the best Galician seafood as a reward for your effort.

The Northern Way from Luarca

If you are one of those who wants to enjoy the beautiful towns in the north of the peninsula, the Camino del Norte allows you to do so, even if you only have 10 days. This route, also called the Coastal Way, is quite popular among pilgrims, although it is not as crowded as the French or the Portuguese Ways.

If you want to do this Camino de Santiago in 10 days, you can start in Luarca, a beautiful village that was of great importance during the Middle Ages for its fishing tradition. From this time there are still remains of a wall or old neighborhoods such as El Cambaral that give all the charm to the place.

In this town, even the gleaming white cemetery facing the sea is worth visiting. Also its seven bridges, which add charm to the town, or the Fonte Baixa gardens, the largest private botanical garden in Europe. You can admire it all from one of its viewpoints, so as not to waste time: El Chano, for example, located at the foot of the hermitage of San Roque.

Although the Primitive Way begins in Oviedo, if you only have 10 days we recommend that you start from Pola de Allande, considered by some to be the queen stage of this way. What is certain is that it is one of the most beautiful.

The Primitive Way is not particularly easy, since it has long stages and few services for which it is better to be physically prepared. Precisely in Pola de Allande, an important ascent to the Palo pass awaits you, located more than a thousand meters high, which will be compensated by the views you will obtain of the Nisón river valley. However, you will have to continue to Berducedo to be able to rest and recover, so save your strength until you reach this town.

On the rest of the Primitive Way you can continue enjoying the green landscapes of the north and tasting Asturian and Galician cuisine. You will pass through Lugo, where in addition to seeing its famous Roman wall you should have a glass of wine and take advantage of the free pinchos and tapas in the city’s bars.

Shortly after Lugo you will join the French Way in the last stages: don’t forget to have a portion of octopus in Melide before continuing to Santiago de Compostela.

The Sanabrian Way is our last proposal if you only have 10 days to make your pilgrimage. Starting specifically from Puebla de Sanabria, the town that gives its name to this alternative route, you can enjoy a natural environment dotted with monasteries, without suffering the crowds of people from other paths.

La Puebla de Sanabria is our final touch in terms of suggestions to do the Camino de Santiago in 10 days. It is one of the most beautiful towns in Spain, where you will find a historic center of great beauty, located on a hill and dominating the surroundings. Mansions, wooden balconies, noble coats of arms and slate roofs are everywhere, but the protagonist continues to be the Castle of the Counts of Benavente.

If you have a little time before starting your adventure, do not miss the well-known lake of Sanabria, the largest in the Iberian Peninsula of glacial origin.